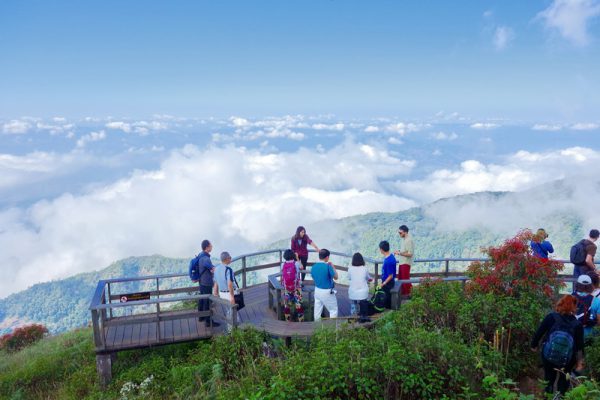 Kiew Mae Pan nature trail situates at approximately 2,200 meters above sea level, is 3.2 km. long and takes around 2-4 hours to complete. The air is thin and cold and it can be very windy. You should have proper walking shoes and bring along a jacket, hat, water bottle, camera and a notebook.

At Kew Mae Pan, you can find 3 different type of forest start from the rain forest with full of moss and fern. Then, Semi alpine; where you will enter into a large field, which changes color from green to a beautiful golden brown. You will see numerous numbers of big, beautiful ‘Thousand-year red roses’ (the Rhododendrons; between December-February) along the cliff. The trail will also give you a chance to find the numbers of the rare bird species such as Green-tailed Sunbirds, Flycatchers, Vivid Niltava. Little sunlight cart penetrate, the dense canopy but there is enough for the epiphytic filmy fern to thrive. This is an ancient, its fossil record dated back 230 million years ago. Its leaves are so thin, they comprise of only one cell layer allowing gas and water molecules to diffuse directly through them.

During the short dry spell, they become dry, crispy and curly but only to spring back to life with a touch of cloud. At this elevation, the temperature is low enough for cloud to form. The forest obtained most of its water directly from the cloud condensation.

The close cauliflower-like canopy is well separated from the undergrowth. Unlike the lowland tropical forest, there are few small trees and climbers. Epiphytes like orchids, ferns and abundant, covering almost every trunks and branches. 3 Humble origin of a mighty river

The deep gorge on the other side is an evidenced its previous course. The low temperature and the splashing against rocks make mountain streams rich oxygen. All the streams in this watershed area flow into the Ping Rivet and eventually into the mighty Chao Praya, feeding the lives of millions of people in the central plain. 4 Plants community in the cloud forest

Members of the Ginger family are predominant ground over plants. Soils in cloud forest are rich but boggy and acidic. Few seedlings can grow where the leaf little is too thick. Situated at a high altitude, cloud forest has to withstand strong wind. Many trees gave in and fell, letting in sunlight to flood the forest floor like never before. Trees that cannot withstand strong UV light will gradually die out, giving opportunities- for the seeds of non woody plants to grow rapidly without competition. But when the soil become shaded and moist once again, the rapid growing woody plant will then take over. Slowly the original trees will recolonize, until the repair process is done, leaving little evidence of scar. Unlike trees, vines do not invest energy in creating large trunk to stand tall and strong. Instead, they grow in length, clinging on trees tor support and climb to reach for the canopy rapidly in search of the precious sunlight.

The network of these vines provide convenient aerial routes for the squirrels and civets to travel from tree to tree. The poor soil, steep slope and frequent fire prevent re-colonization of the Kiew Mae Pan. Constant battle to reclaim territory occurs at the edge of forest. Here, the meadow wins the battle. Flowers and a few small bushy plants from the Himalaya thrive here, create a unique habitat of the “sub-alpine meadow” At the bottom of the shallow gully where the soil is most damp, small flower bushes can grow but on the top of the mound where soil is dry, exposed to the wind and occasional fire, only the hardy bracken fern with its thick leaves to limit water loss are found. The stems of the fern lie beneath the ground so are protected and can regenerate after a fire. The most beautiful things in the world cannot be seen, or even touched. They must be felt with the heart. 10 Rock cliff – a safe home for the goats

Goral are found from about 1000 up to 4,000 meters. Their range is from the Himalayas and northern India, to southern China, Burma and northern Thailand. The Thai species are mainly gray-brown in color much like the boulders and rocks that they live around. Over the years, erosion by wind and water has taken away much of the soil and rock of this hill side, leaving behind the most durable piece at this twin granite rock outcrop. The forest on the opposite sides of the mountain ridge are very different. The trees on the outer slope, facing the sun and the wind, are stunted. The soil here is of poor quality since the humus, layer is washed away by the rain. The occasional bush fire from the village below degrades it further. By contrast, the inner slope, protected from these hazards, is lush and green.

The rainfall over here dripless slowly among the leafy trunk and slowly sieves through the root system to eventually form the forest stream below. Windy condition deprives the plants on the cliff of the precious water. The hardy rhododendron has what it takes to survive such harsh a condition. Its thick, sticky and hairy leaves are an adaptation to minimize water loss through transpiration. Their bright scarlet flowers, visible from distance even in a misty condition, advertising to the sunbirds to come to pollinate them.

At the base of the trunk, there are many spare buds ready to regenerate new branches in case they become damaged by wind or fire. Looking down, you can see the secondary forest at the lower elevation, which is very different from the cloud forest. It comprises of the pioneer species of sun loving plant such as reeds and bananas. Within the cloud forest much of the precipitation is the form of fog drip where fog condenses on tree leaves and then drip on to the ground. Because of the low decomposition rate due to the cool climate, the leaf titter and humus layer is thick acting like a massive sponge. This sponge prevents excessive surface water run-off and flash flood during heavy rain. In the dry season it slowly releases the trapped water to provide year round supply of clear and clean water. Mosses love water. They grow abundantly around the tree bases and damp rocks, they are among the first plants to evolve from the primitive water plant to adapt to life on land. Their ‘roots’ are used primarily to anchor the rock surface. Water and nutrients simply diffuse through their leaves.

During drought, they become dormant. Millions of minute dust like spores are carried by the wind to settle on cool damp place where they will be able to germinate once again. In a mature undisturbed cloud forest, you would find different kinds of trees with various heights. But here the tree community are not so diverse and are of relatively same age and height. This is a clue that this patch of forest has been previously disturbed, probably by a storm. Despite the height of these giant trees, their root system are fairly shallow, spreading horizontally along the top soil. Fast surface water runoff on the steep terrain erodes the forest top soil .so, that it is only 1-2 meters deep. Below is solid rock.

Some of these trees develop buttress roots spreading out for support. But even with these specialized roots, they may not be able to withstand heavy storms. The tall tree ferns are largest non-vascular plants. But since they lack strong woody stems, they can be easily broken. That is why we will find them only in the wet and shady gully, protected from strong wind and sunlight.

If the forest was disturbed resulting in extensive clearing, the tree ferns would not have survived. This cloud forest nature trail is and outdoor classroom for everyone to learn about its complex ecosystem, evolution and adaptation, symbiosis and water cycle.

It is precious gift from nature for everyone to enjoy. As human, we cannot create such wonder, but we can conserve it and cherish it for generate to come.

How to get to Kiew Mae Pan Nature Trail

In the area of Doi Inthanon National Park, Kiew Mae Pan is on the 42km marker on highway 1009. The nature trail is open from November to May. .

Entrance fee for trekking along Kew Mae Pan Nature Trail is 200 Baht. A guide service, provided by the national park, is compulsory.